In the two years since I started sewing, I have sewn a lot of garments for myself. J and N have also been prime recipients of the sewing love, especially in the beginning. I’ve even sewn the odd item or two for my mother and mother-in-law and taken a commission or two.

But I had never sewn anything for my husband. Not a thing.

There are several reasons for that glaring omission. Albert is a personal trainer and athlete so most of the typical “guy gift” or “dad gift” ideas that I saw he would never use. (What is a guy who spends his day in casual or workout clothes going to do with a pile of handmade ties?)

I wanted to add some quality items to his casual weekend wardrobe, but was having trouble finding a project because (1) Albert is super-picky about his clothes and (2) most men’s patterns out there just flat-out suck. For example, these are a couple of the actual Burda offerings at my local Joann’s: 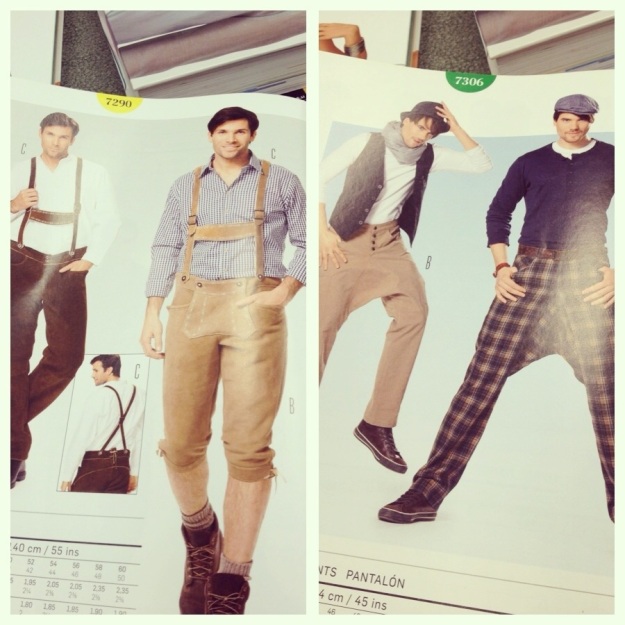 Granted these were the most egregious offenders, but the rest were all kind of bleh.

Colette Patterns has the Negroni Shirt, which I have and is a nice pattern, but the “camp shirt” style wasn’t particularly inspiring to Albert.

I stumbled across this start-up indie pattern company a few months ago after a random mention on House of Pinheiro shortly after they released their very first men’s pattern — the Newcastle Cardigan.

I bought that pattern (which I still haven’t made. It’s hard to get motivated to make a fleece or wool cardigan when it’s 90 degrees outside), and quietly started stalking their blog.

A couple weeks ago, they put out a call for pattern testers for their next pattern release — the Jedediah Pants. Well, you all know how bossy lawyer me likes pattern testing 🙂 And the pattern looked awesome so I volunteered.  I was apparently one of the first to respond that I could complete the project within the allotted time because I was selected as a tester!

That kicked off a long consulation process with Albert.  I wasn’t about to sink hours into making a pair of pants that he hated and would never wear.  So I involved him in every step of the process, from selecting the fabric and notions to modifying the fit to his liking to just exactly how wide the hem should be.

And it paid off!  The result is a pair of pants that he loves!

We spent a few hours one evening selecting fabric, and he chose this scrumptious recycled hemp and organic cotton blend from Hart’s Fabric.  Most of the notions came out of my stash.  I used gray Gutermann thread that matched the fabric exactly for the bulk of the construction, and a lighter denim topstitching thread for the contrast topstitching.  The buffalo nickel button came from Button Jones. 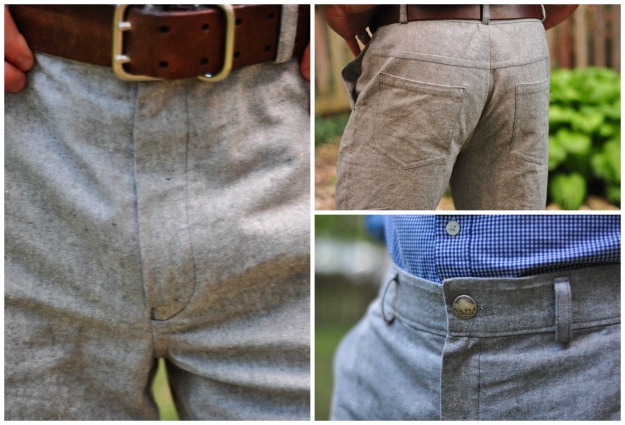 But, what you’re really interested in, of course, is the pattern.  Well, it’s great.  The pattern is stylish, well-drafted, a great fit, and beautifully finished.  I cut a size 32 for Albert, which is generally the size he wears in RTW pants.

Before cutting into my fabric, I made a muslin, and was quite glad that I did.  The waist, hips and crotch were all a perfect fit, but I had to make some alterations in the legs.  Because Albert is an athlete, he has pretty muscular thighs, and the pants, as drafted, were a little tighter in the thigh than he would prefer.

Also, after putting on the muslin, it was apparent that the “slim” fit of the Jedediah Pants just wasn’t his particular style.  Luckily, that’s all an easy fix.  I added 1/2″ to each of the side seams in the thigh area, which gave him an extra 2″ of ease through the thigh.  Then I measured where his knee would hit in the pants, and redrew the pattern line straight down to the hem from the knee for more of a bootcut fit as opposed to the original slim cut pants.

And that’s it!  I didn’t have to make any alterations to the waist or hip area, and the crotch depth was perfect! 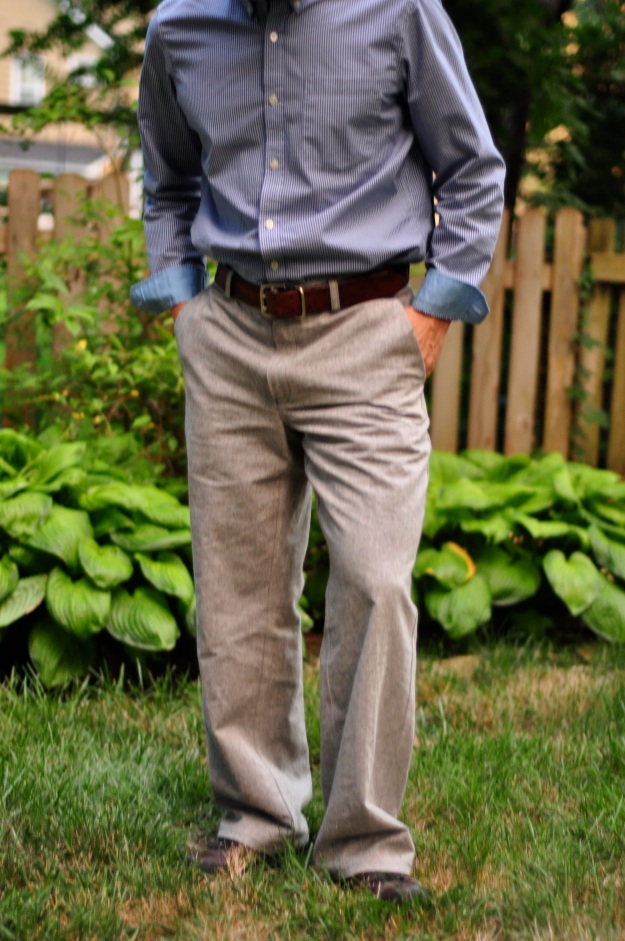 I also love, love, LOVE how the fly came out on these pants.  The pattern pieces were shaped a little differently from flies I have put in on kids’ patterns before, and I can say without hesitation that I prefer the fly on the Jedediah Pants. It looks completely professional and RTW.  No one would ever guess these pants are handmade! 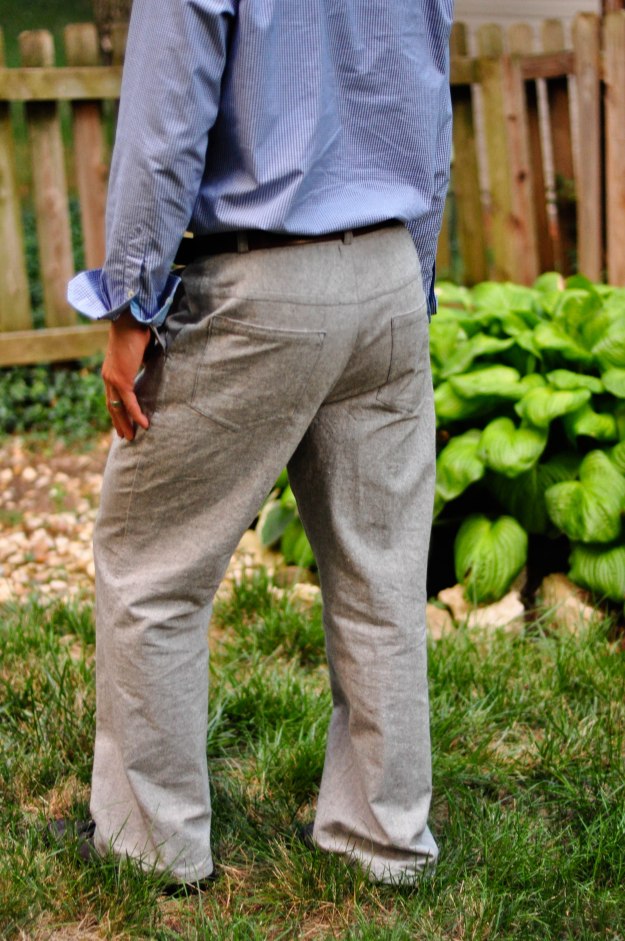 The other thing about this pattern that really merits discussion is the finishing.  These pants are probably the prettiest garment I have ever made.  There is not a single exposed raw edge anywhere in the pants, and every single seam has a really quality finish.

The pattern gives several finishing options, so if you’d rather go quick-and-dirty and just serge or pink seams, you can do that.  But it also walks you through quality, couture finishes for each of the seams.  I have a newfound love for nice seam finishes, and I knew that Albert would appreciate those details, so I included them. 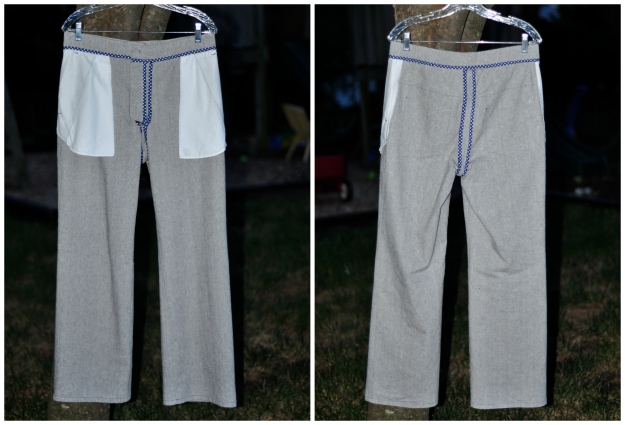 The insides are as pretty as the outsides

The pockets have French seams, the inseams and outseams are flat-felled, and the other edges, including the waistband, seat seam, and fly shield, are bound with bias tape.

I also concocted my own way to finish the back patch pockets so that there aren’t any raw edges there either, but I have a mini-tutorial in the works for that, so I’ll save those details for later 🙂

Now all that finishing takes time.  A lot of time.  These pants were undoubtedly a labor of love.  I originally had planning to sew two pairs in tandem, but all the finishing and details and topstitching was taking so long that it soon became abundantly clear that if I was going to finish by my deadline, I’d have to focus on one pair.  If I had to guess, I’d say that from fabric cutting to finished hem, these pants took 9-10 hours of solid work to construct.  Not a quick sew by any means, but totally worth the effort!

Be prepared to see more Jedediah Pants in the coming weeks and months.  I have another pair for Albert about 3/4 done in a lovely Robert Kaufman yarn-dyed linen, and Albert has requested a pair of jeans!  Last night we ordered materials for me to start working on a pair of raw denim jeans for him, complete with professional hardware 🙂

Fit: Amazing.  Albert wears a 32 in RTW pants, and the 32 in the Jedediah Pants fit him just like RTW.  I made some alterations in the legs, as details above and below, but he also finds RTW pants to be tight in the thigh.

Fabric: A recycled hemp and organic cotton blend from Hart’s Fabric.  The bias tape I made from quilting cotton in my stash, and the pocketing material is just white voile from www.lowpricefabric.com.

Modifications: All the modifications were in the legs.  I added 1/2″ to each seam in the thigh area to give him an additional 2″ of ease.  Then I widened the lower leg into more of a bootcut by re-drafting the lower leg to come straight down from his knee. The original slim cut of the pattern is great, just not really his style, and I wanted these pants to be something he would love to wear.

Physical pattern: Thread Theory only does PDF patterns right now, and anyone who has read any of my pattern reviews knows that I generally detest PDF patterns.  This is no exception — if I could get this pattern in print, I totally would.  The PDF is a beast!  The pattern sheet is 42 sheets of paper that all have to be trimmed and taped together (though the pattern does come with a single-page file that you could take to a copy shop like Kinko’s and have printed), and the resulting pattern piece is huge.  I completely understand why indie pattern companies do PDF patterns given the startup costs of a printed pattern line, but I really hope that Thread Theory can ultimately do well enough to release their patterns in print.  That being said, the fact that this is a PDF shouldn’t stop you from buying the pattern given the quality of the product, especially compared to what else is out there.

Overall grade: A. It is so hard to find good patterns for men, and this pattern is really a gem.  It’s also a great value at only $8.50.  I’m accustomed to paying at least $16 for a quality adult indie pattern, many far less complicated than this one, so $8.50 just seems like a steal to me!  If you have a man in your life who would appreciate and wear a handmade garment, do not hesitate to buy this pattern. You won’t regret it!

** Disclosure: As a pattern tester, I received the pattern for free, but received no other compensation for this post.  All opinions are 100% my own.

33 thoughts on “Wait, what? You want to sew for a MAN? — Thread Theory and the Jedediah Pants”

Hi, I'm Katie -- a lawyer, sewist and mom to three wonderful kiddos. During the day, my time is filled with research and writing, toys and drool. But the evening hours are my own, and I fill those with fabric, sewing, and of course blogging! Thanks for stopping by my little creative corner of the web! 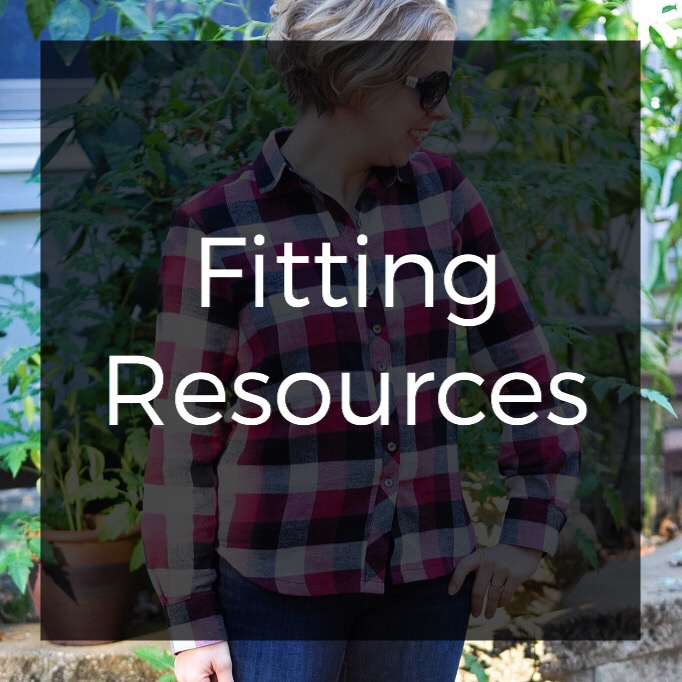 How I Stay Healthy and Fit